Common Tern - from east or west? 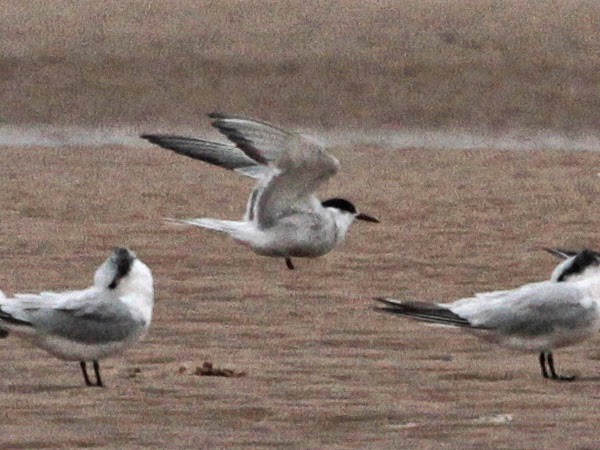 
Well the Lesser Whitethroat may not have made the grade, but what about this Common Tern?

Since 2011 there have been a number of reports of Common Tern showing characteristics of the eastern form longipennis.  Possibly all reports in Suffolk and Norfolk relate to a single individual.  In May 2014 one was photographed at Scolt Head and in August it was seen at Cley.  I gather it had summered on Scolt Head, though I'm not clear how often it was seen there.  Knowing only of the Cley reports, and not realising it had summered at Scolt, I was not expecting to see it when I visited Burnham Overy in August.  On 25th August I picked up a tern on the far side of the channel that divides Gun Hill from Scolt Head and which, momentarily, I thought was going to be a moulting adult Black Tern, or even a Whiskered Tern.  Quickly I determined it was no marsh tern but an odd Common Tern, and then thoughts of Eastern longipennis entered my head.  It showed a fully black cap, unlike other Common Terns present, and a dark bill.  Together with the darker plumage, especially on the underparts, I wondered if this could be the Eastern Common Tern from Cley.  I'd seen photos of that bird, and I recalled the grey underparts being fairly even, but this bird looked almost patchy - or at least it was distinctly darker around the mid-rear flanks and centre of the belly, and the dark colour seemed to extend on to the underwing which I'd not remembered was the case on longipennis.  Perhaps if I'd realised the Eastern Common Tern had spent most of its time in this area and was only visiting Cley from here, I'd have reached a different conclusion, but I didn't realise that, and the odd pattern of the darker colour made me dismiss it as an odd dark-billed late-moulting Common Tern, probably contaminated to make its plumage look dark.  In any case it was a long way off and before I could get anywhere near it a dogwalker had flushed it right off.  I didn't really have an opportunity to fully resolve it, but didn't particularly suspect that I'd been watching anything rare.

News that the Eastern Common Tern was at Scolt a few days later made me think again, especially when I learned it had probably been there all along, and had just started commuting to Cley each day.  Suddenly it didn't seem unlikely that it would be visible from Burnham Overy.  Maybe my bird had been that after all?  I would never know for sure unless I saw it again, and on 18th September I did - or at least I might have done.

This time it was in the same place, asleep with Sandwich Terns and this time the only Common Tern present.  It looked dark - not just because it was with Sandwich Terns, at least I didn't think so, but I couldn't see the underparts clearly because of the angle it was facing.  I couldn't see its bill (tucked in) but from what I could see of the head it seemed to have a full clean black cap.  It was a long way off again though, and I couldn't get anything more on it.  Once again a dogwalker flushed the whole flock, but unfortunately chose to do so when I was momentarily distracted by a Redstart popping up next to me.  I didn't see it get up and fly off, and I couldn't relocate it.

No sign next day but on 20th there were 3 Common Terns there.  One of them (the only adult) looked interesting but it was sooo far off neither I nor the other birders I'd put on it could resolve it.  It looked dark (above as well as below), the bill looked black, the cap looked full and the legs looked diddly short, but it was impossible from this far off.  I headed off down the beach taking care not to flush it and eventually got a reasonably good look.  From closer I could confirm that the underparts were indeed grey, darker than I would expect on a Common Tern, but that this did not seem to extend far up to the head which I would have expected on longipennis.  Interestingly the grey did appear darkest in the places where the bird on 25th August had looked dark - I think that may well have been the same bird and the dark wasn't down to contamination!  It looked darker from above too, and on the underwing.  The bill was very nearly black, but in a good view you could see it was actually very dark blackish red.  As for the structure of the bill, I'll leave you to judge from the photos - I struggle with that sort of thing, especially as there were no adult Common Terns for comparison.  It wasn't in full summer plumage after all - the forehead was white, though I didn't think it was so extensively white as on some of the Common Terns I was seeing weeks ago.  There was some smudge of black running below the cap on to the cheek - I'd heard the Eastern Common Tern was very cleanly-marked, so was this an issue?  Structurally it looked sleek and elegant - long-winged, but was I sure it was too much for a normal Common Tern?  Not sure, no.  There was nothing to make me think it definitely wasn't the Eastern bird, but enough to make me doubt it - I certainly wasn't going to start claiming it as such until I'd done a good deal more research.

Now I've looked into things a bit more I still don't have a final answer.  Lots of questions though!

As this bird wasn't in full breeding plumage, the blackness of the bill isn't as clear an indicator of eastern origin as it might have been.  Maybe picking out longipennis with any degree of confidence is just too ambitious at this time of year?

Plate 88 in the Helm guide to Terns of Europe and North America is interesting.  It shows a bird that's very similar to the one I saw, although with slightly less white on the forehead.  The caption states that it's unusual for a bird in such an early stage of moult to show a dark bill and concludes: "This and the very dark outer primaries may be characters of subadult."  If this speculation is correct then could the same be applied to my bird?  Or, given the grey plumage and short legs, could the bird in plate 88 even be longipennis?  Is that bird really within normal variation of hirundo?  If that is hirundo then I see no clear reason why my bird wasn't too.  What do you think?  Is it the wandering longipennis that I've been seeing, or just a normal western Common Tern? 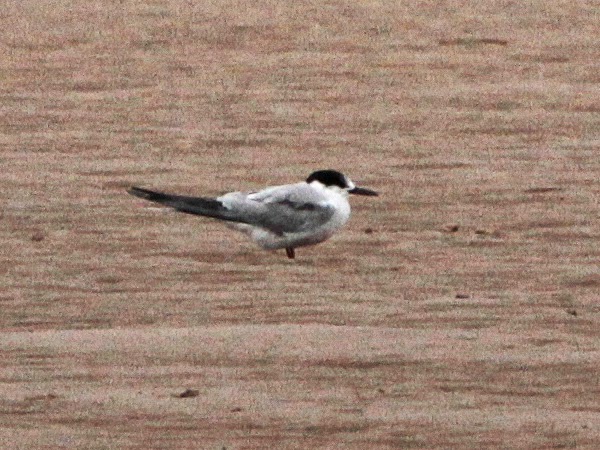 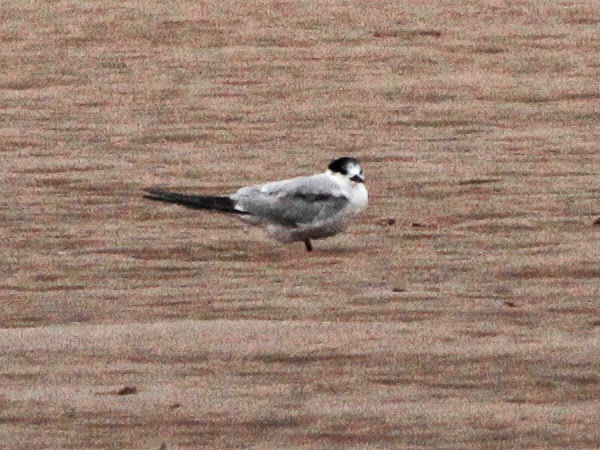 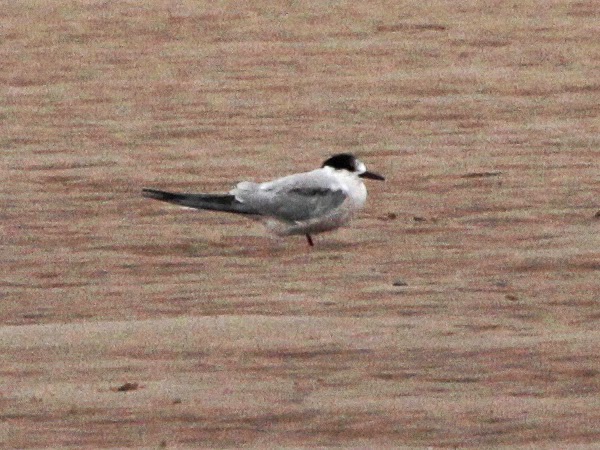 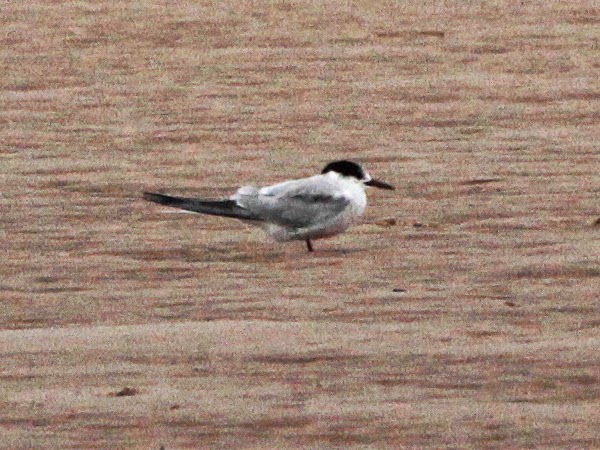 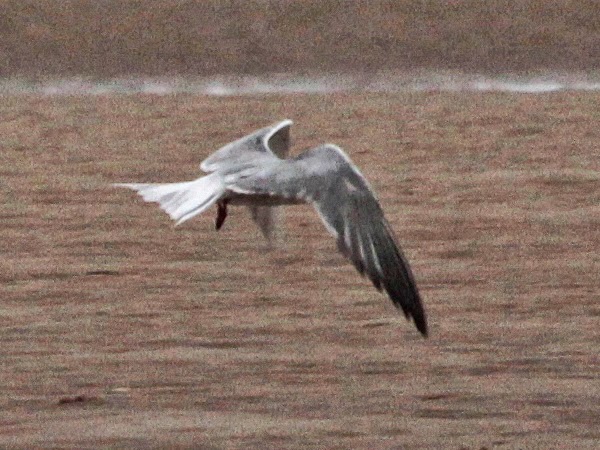 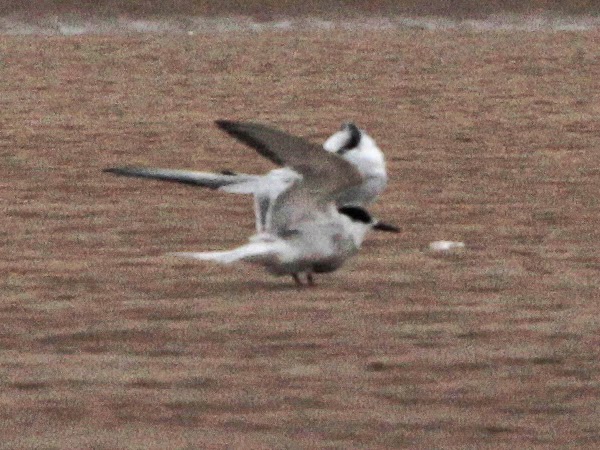 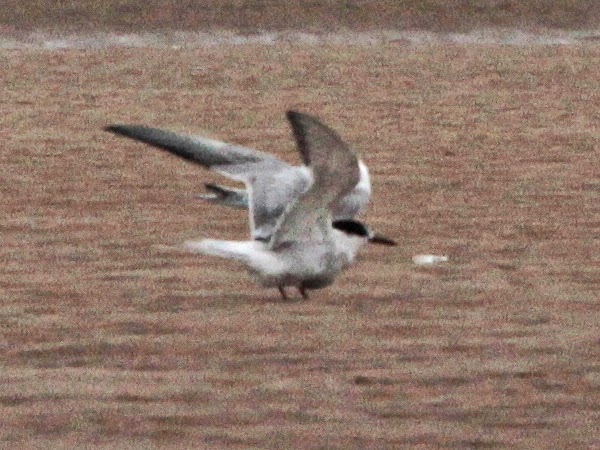 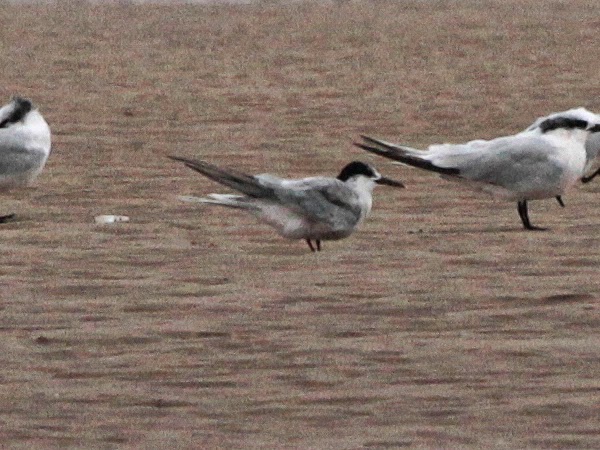 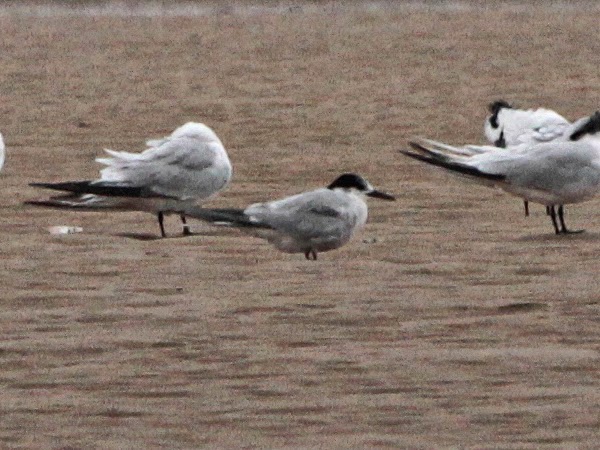 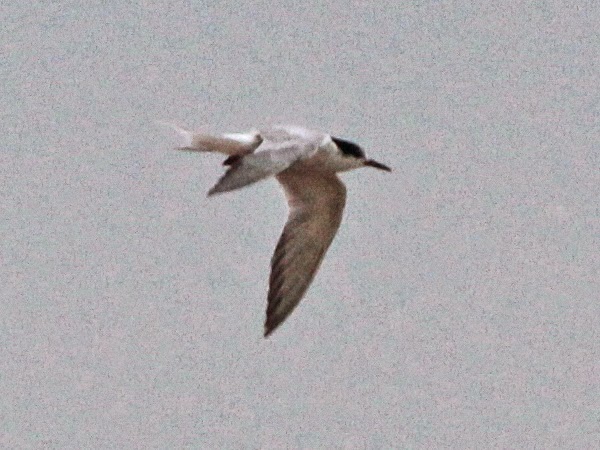 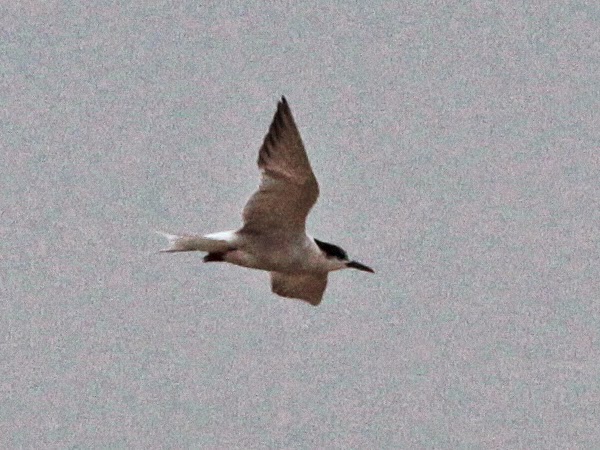 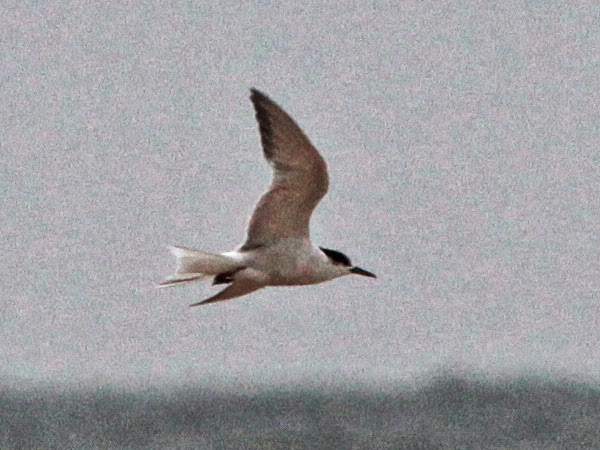 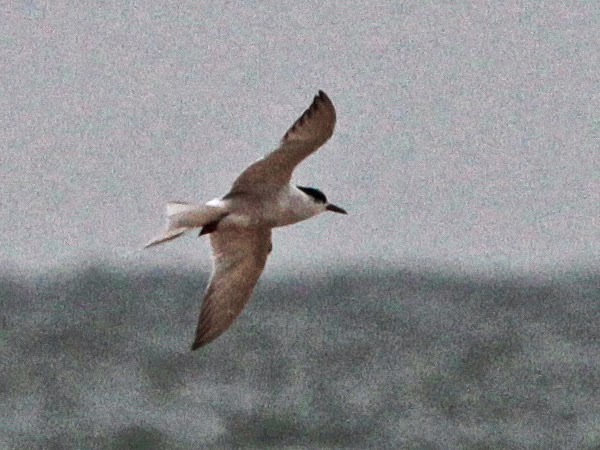 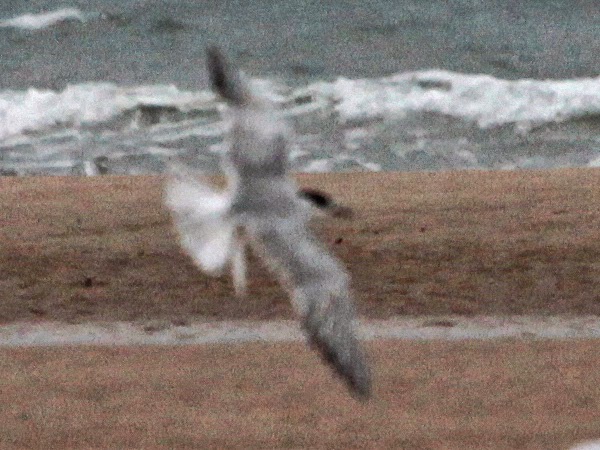 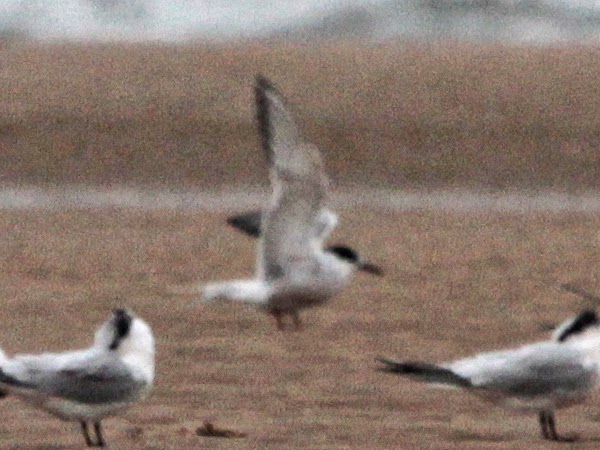 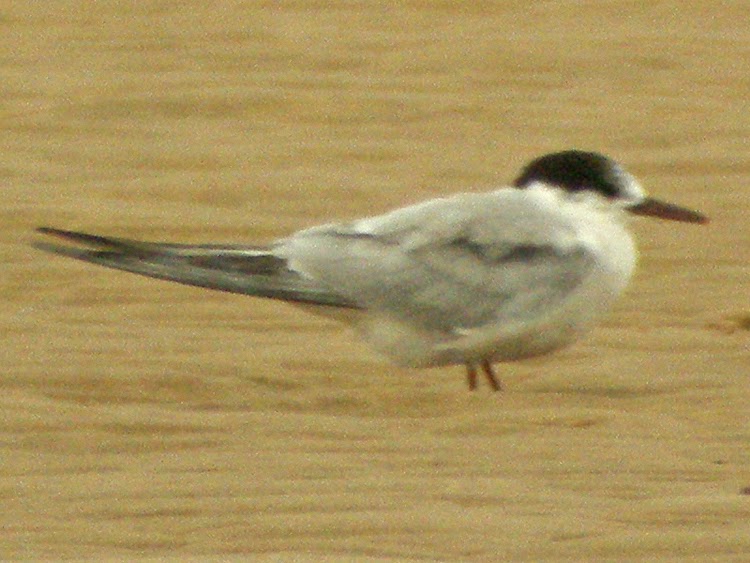 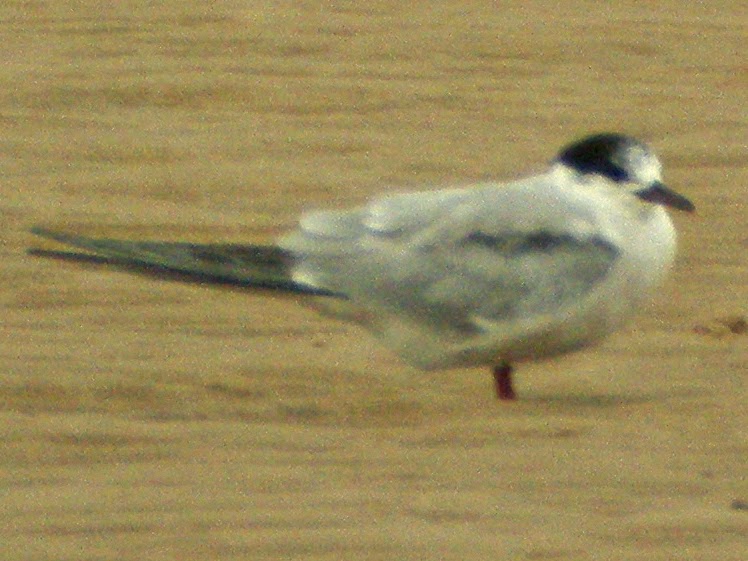 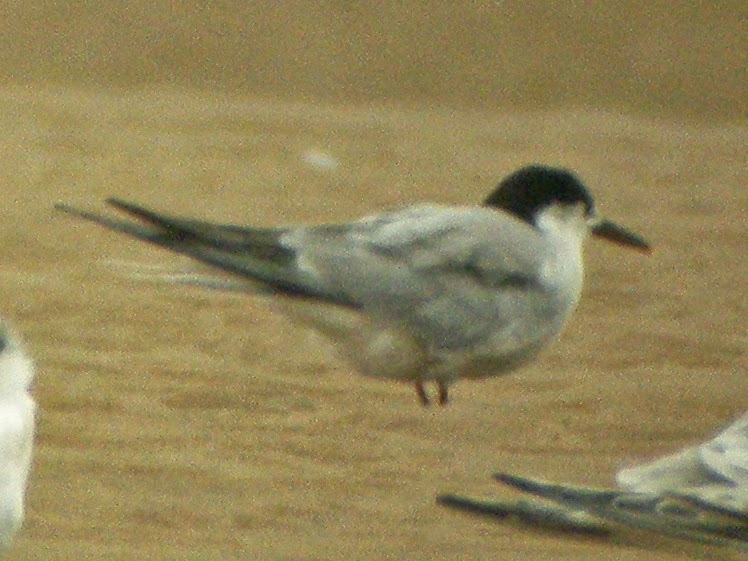 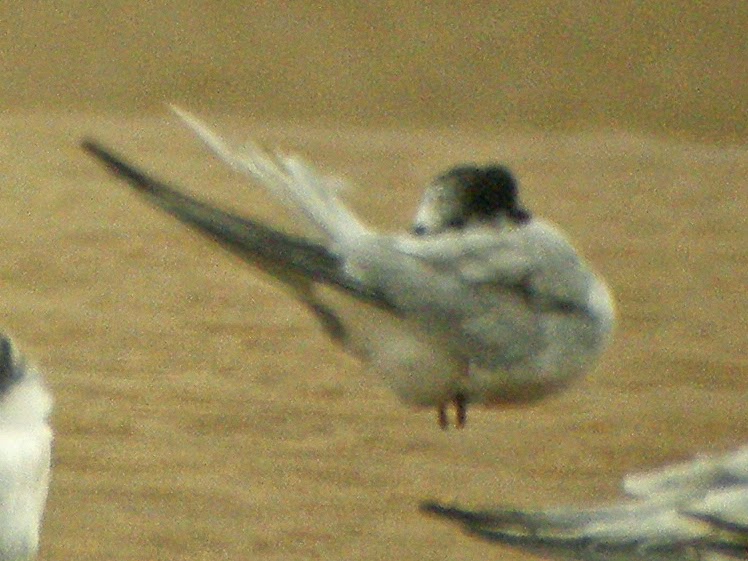 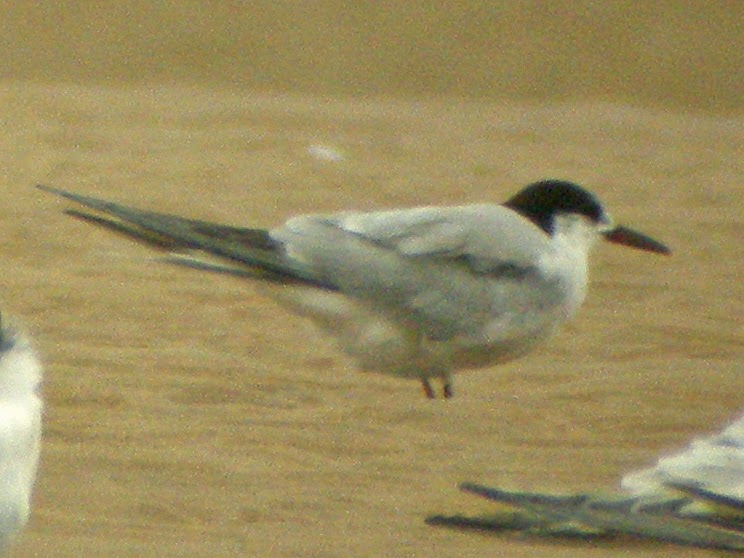