A Lesser Whitethroat - from east or west? 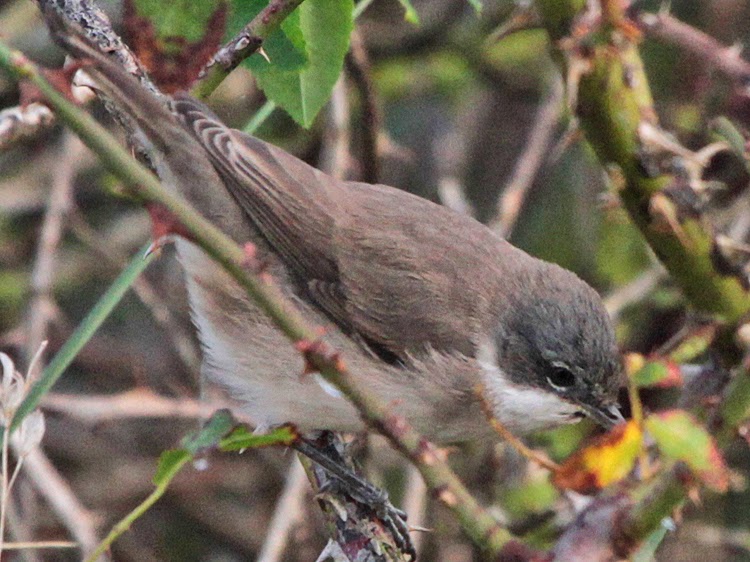 
Back in the 1990s we used to see autumn Lesser Whitethroats that looked a bit different from the typical early-autumn western birds - often they would have quite warm colours on the wings, one I remember being so strongly rufousy that I thought it was a Whitethroat for a second.  I was told they were Siberian Lesser Whitethroats of the race blythi.  Then there was a decree that Siberian Lesser Whitethroats were unidentifiable, even in the hand - in fact if I remember rightly it was even claimed that they were not a valid taxon.  Interest waned a bit but more recently things have taken a turn - they are a valid taxon, and may even by a full species - and some of them might even be identifiable in the field.

I hadn't had time to read the relevant chapter in Martin Garner's new book when I was faced with my first blythi candidate this autumn, and I wasn't prepared.  First day I saw it I just thought it was a western.  Some things looked a bit interesting, but it didn't stand out enough.  Mind you, there was a lot of white in the tail, so I took some photos and resolved to read up that night.  Busy days (easterlies) and busy nights (warm, lots of moths) meant I didn't get round to that before the time I next saw it, but this time I looked harder.

This time I noticed that while sometimes it looked very grey-headed, there was a pretty obvious extension of brown up the nape and on to the back of the head.  The underparts were strongly sullied leaving a clear white throat and the tertials had a good degree of warmth in the colour.  Weren't they pro-blythi features?  Not as brown-headed as one I'd seen photographed recently, but was that enough to force it into the curruca mould?  I wasn't sure, and most other birders on site were only interested in the Red-breasted Flycatcher and Yellow-browed Warbler frequenting the same area.

A quick tweet generated a few responses, generally not very encouraging from a blythi-perspective, but not conclusive.  It's taken me a week to get to sorting the photos out and read up, but in the end I think the naysayers were probably right.  Whatever, it's been a learning experience, and that makes it worthwhile.  I'm still not clear on the validity or practicability of some of the features, but that just means there's still more for me to learn.  Let me know if you think I've missed or misinterpreted anything. 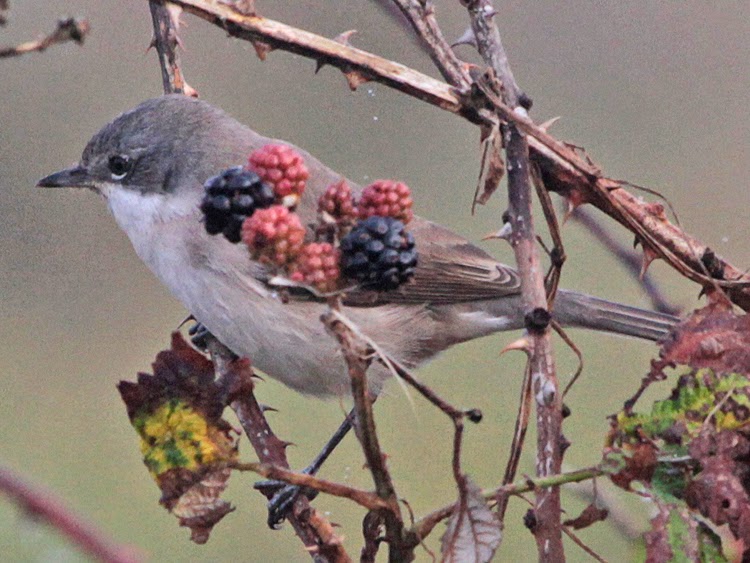 Although most of the upperparts are obscured by blackberries, this picture shows the warmth that was often apparent on the tertial better than most.  You can also see the brown extending up the nape, but looking pretty indistinct here. 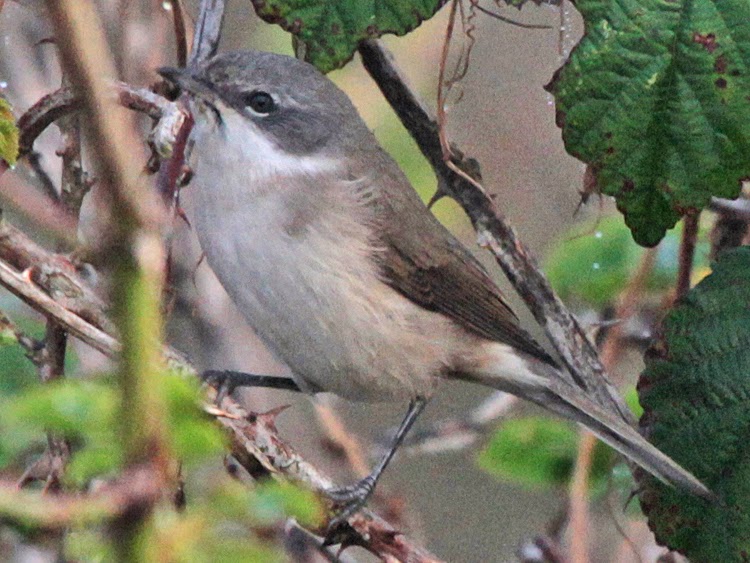 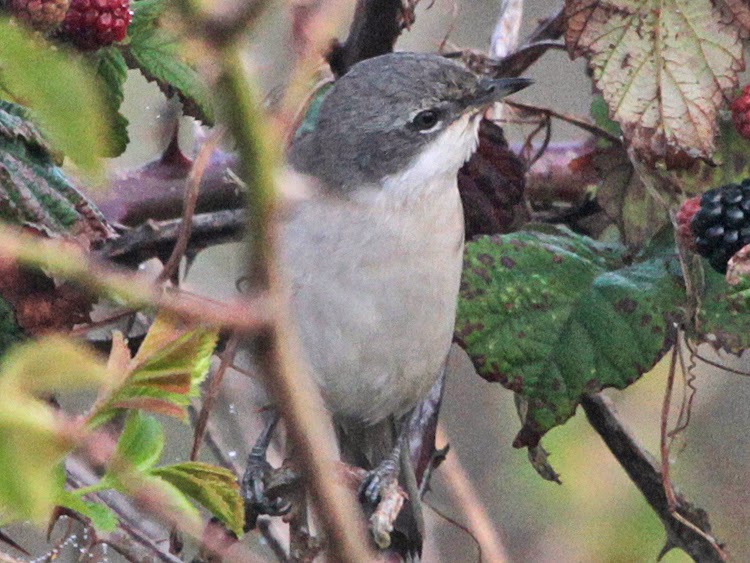 In these two images it looks pretty much like a bog-standard curruca!  No hint of brown in the head from this angle and the contrast between the white throat and dirty underparts isn't even apparent here.  From this angle there's no sign of the warmth in the wings. 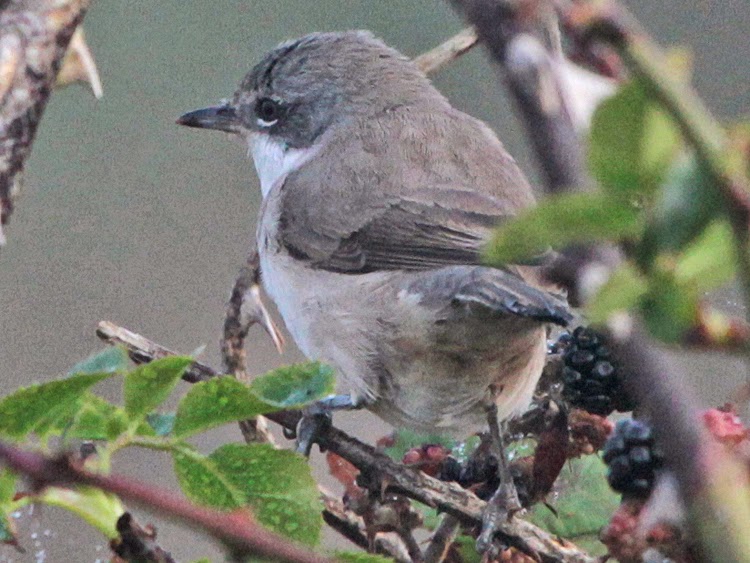 The brown on the head and nape was easiest to see from this angle, but it never looked as extensive as I would have expected to see on a stronger blythi candidate.  Not sure how much variation there is in either taxon in respect of this fieldmark. 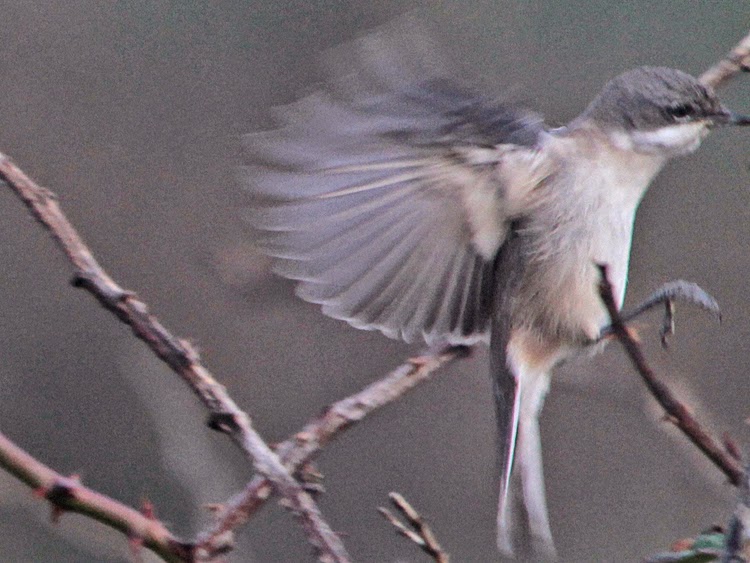 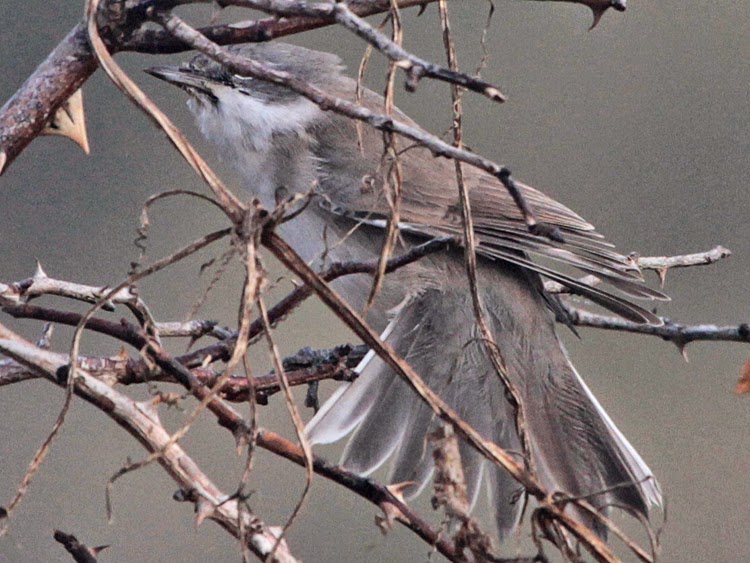 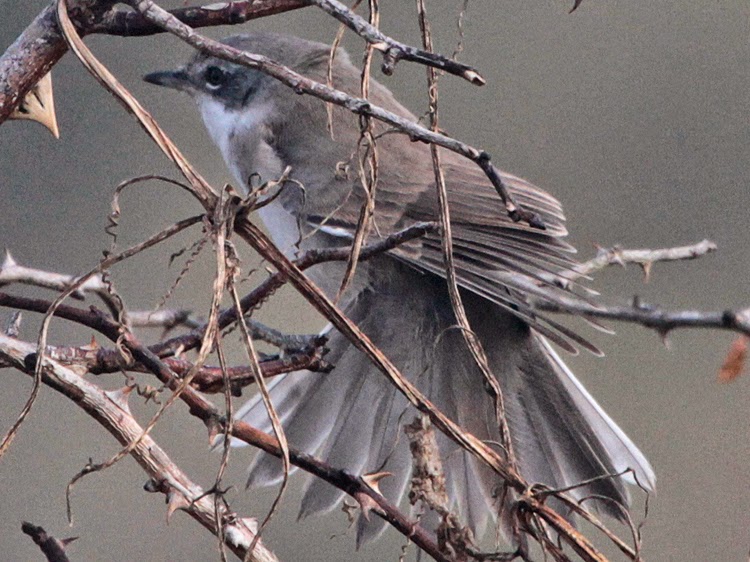 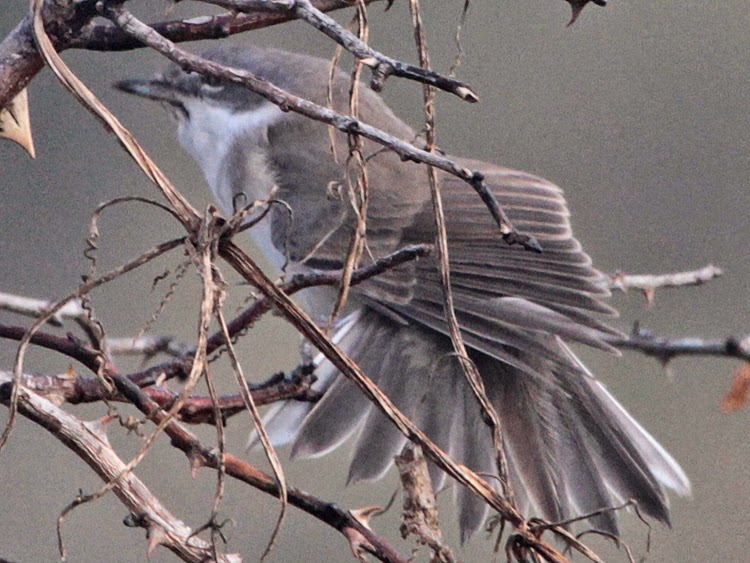 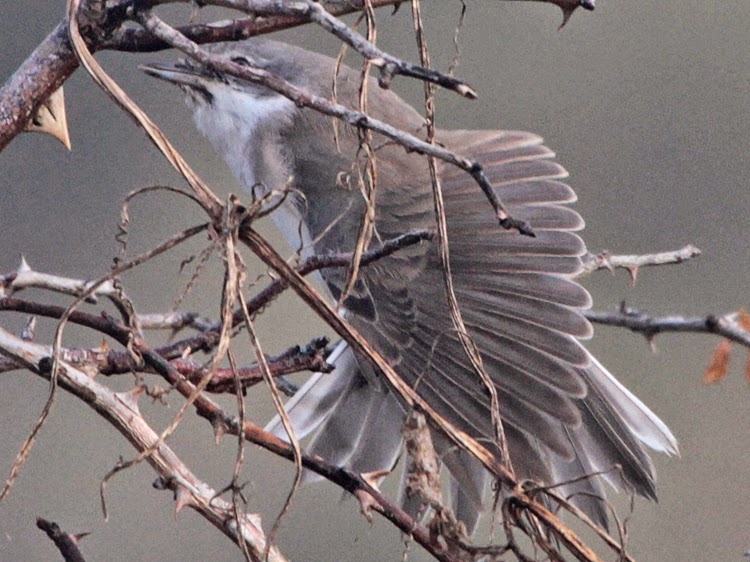 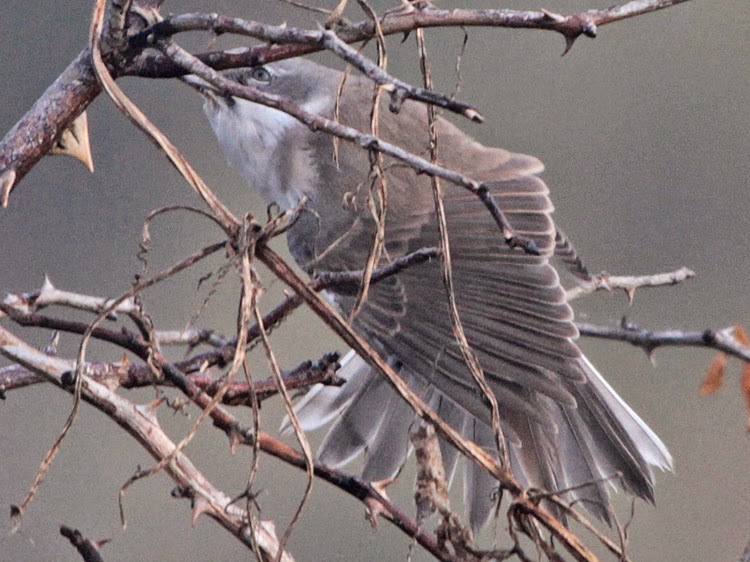 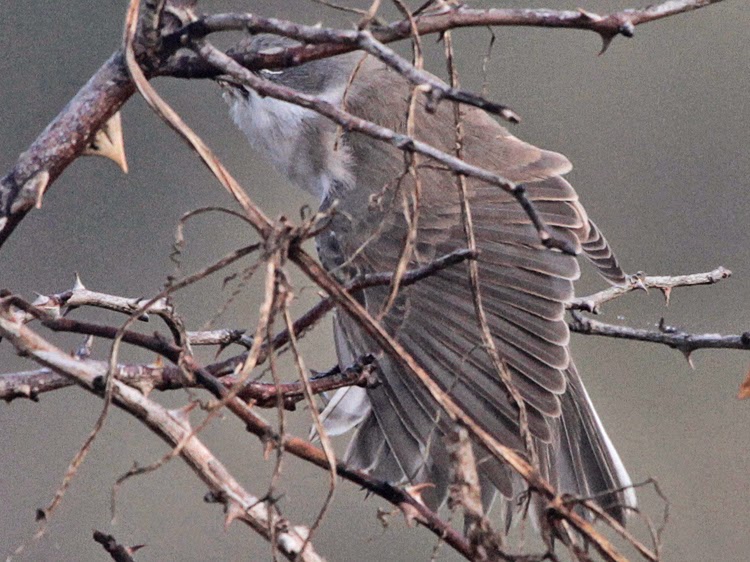 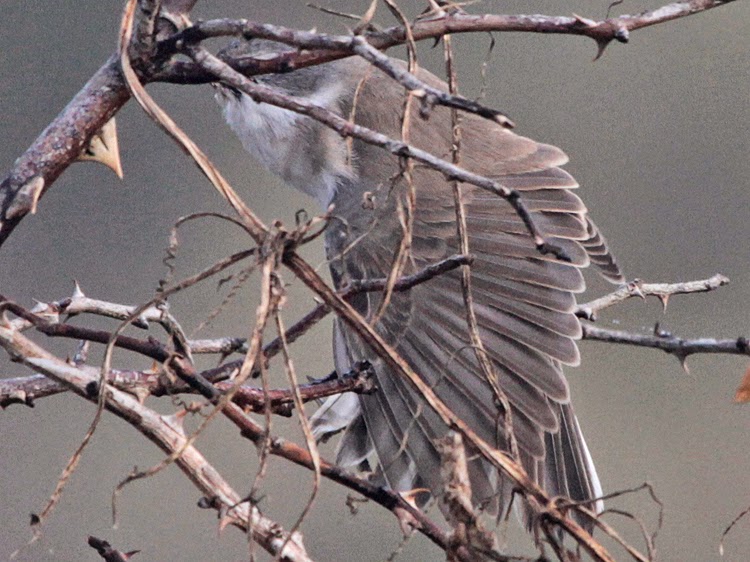 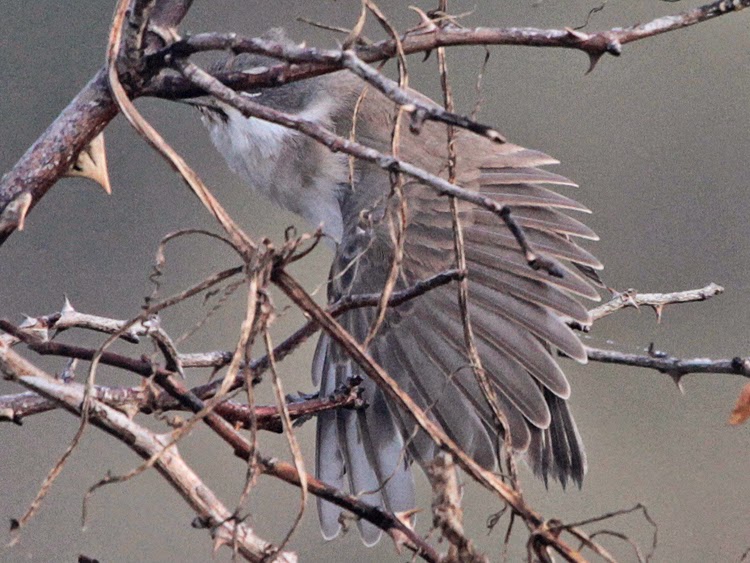 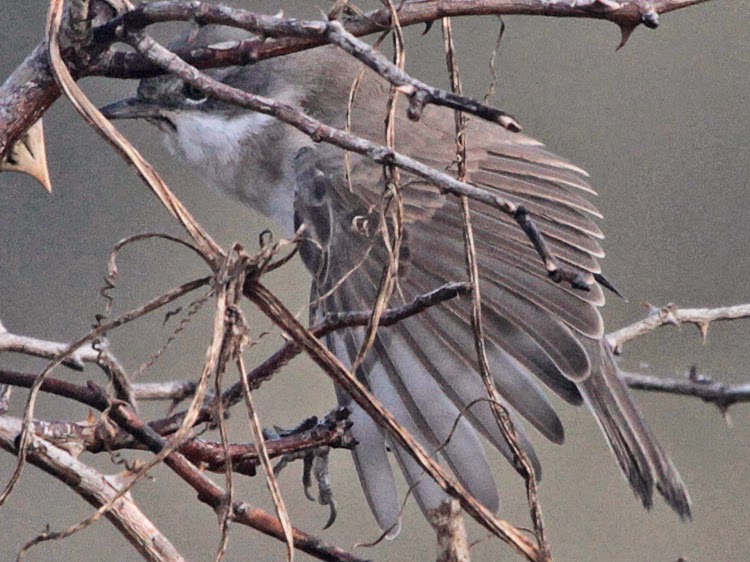 The tail feathers are pointy, making this a bird of the year I think.  Note the outer tail feather pattern - extensively pale on the inner web but not pure white.  I can't do anything with the wing formula - can you? 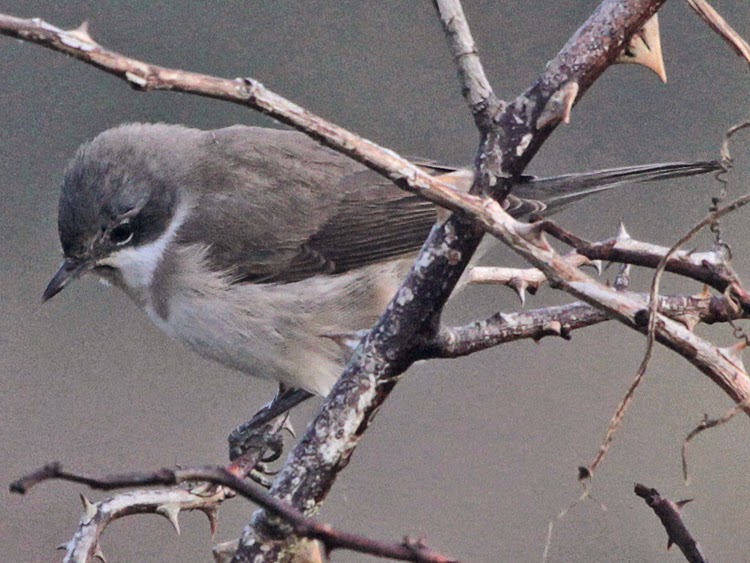 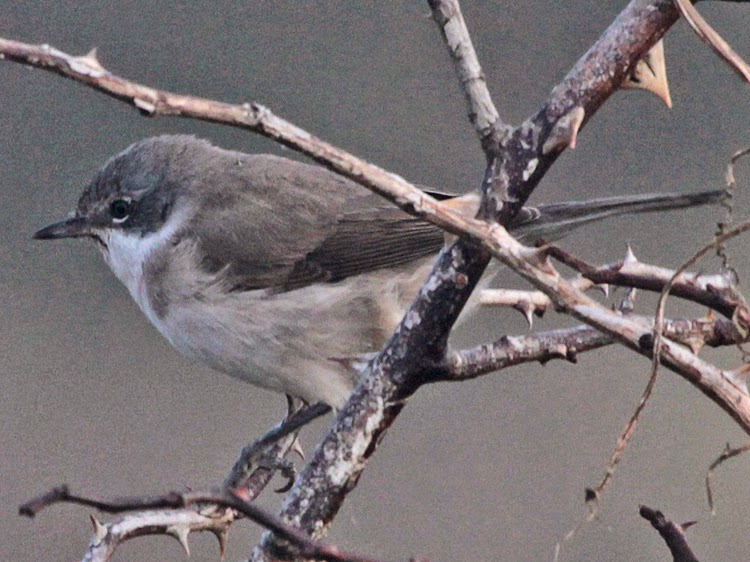 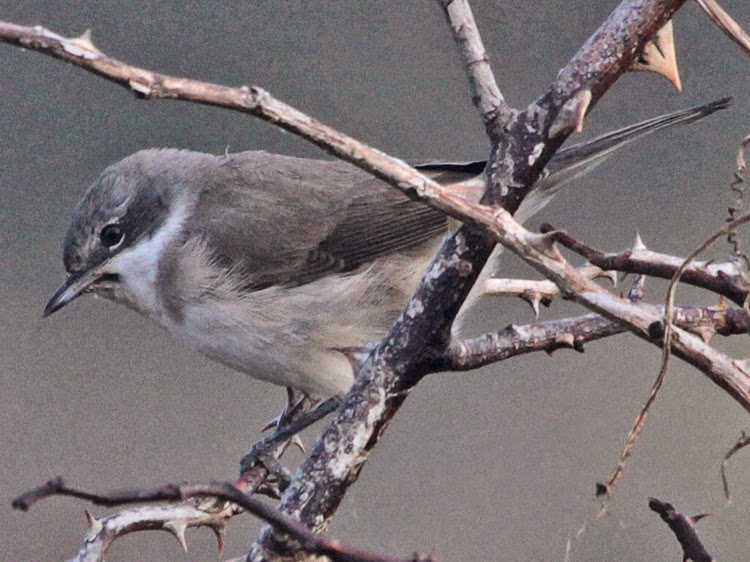 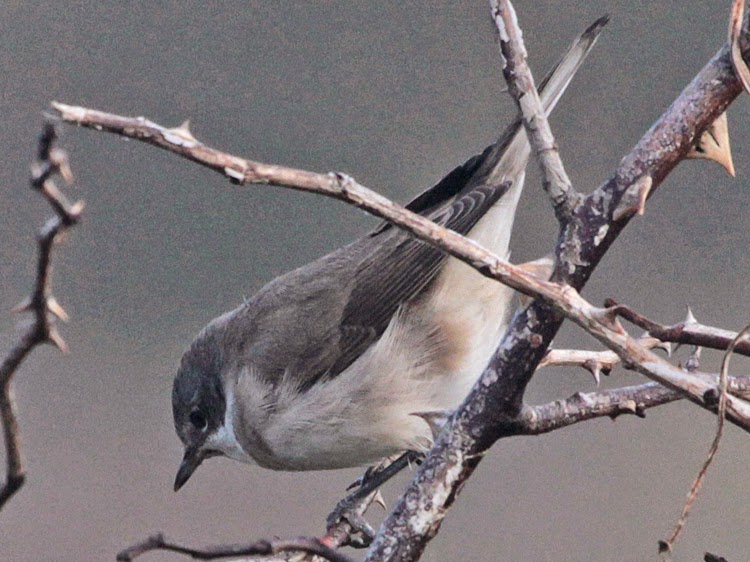 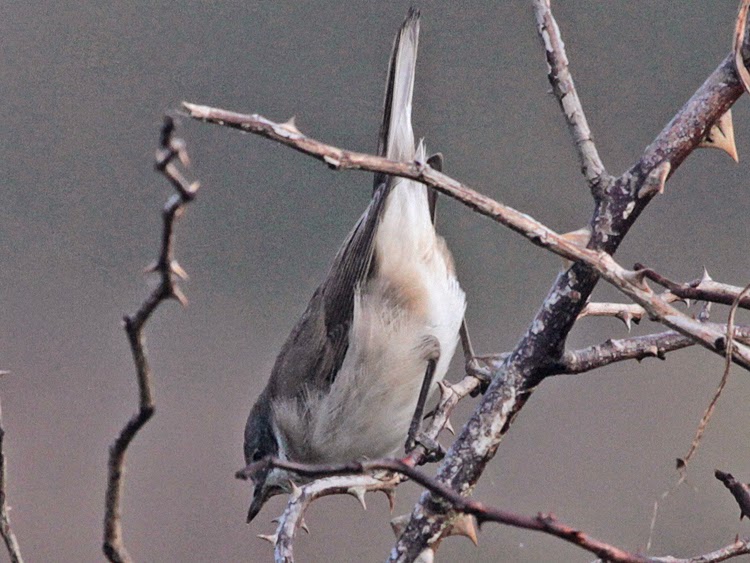 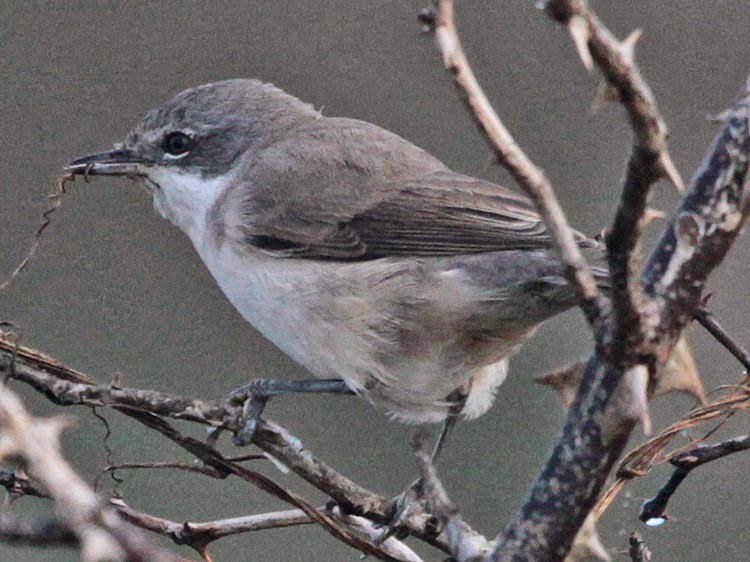 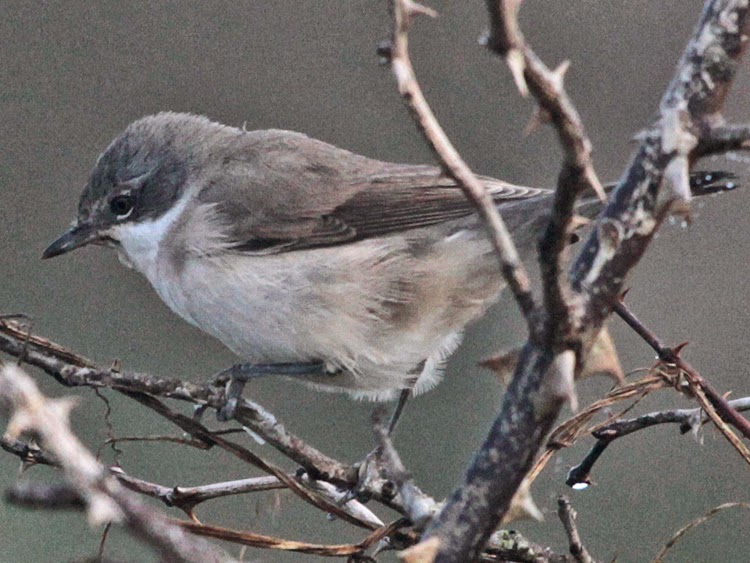 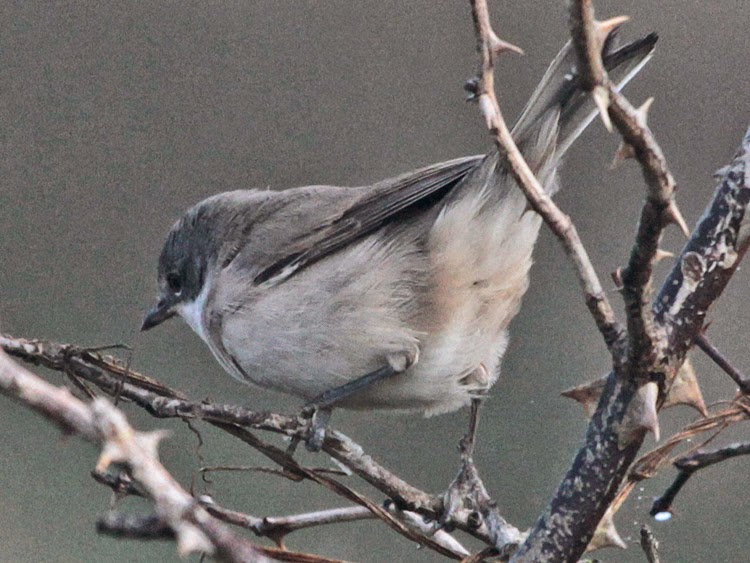 Looks pretty cold in these shots and the upperparts don't really give much reason for blythi-thinking, except perhaps in how pale it looks.  It didn't really look this pale in the field, but nor did it look so cold - shows how misleading photos can be.  Notice how the brown on the head appears and disappears with just a slight change of angle.  The underpart colour also varies - in the field I thought it more obvious and this was one of the things that got me wondering about blythi the most.

Didn't manage to get any decent photos over the next couple of days, but for what they're worth (if anything), here's what I did get. 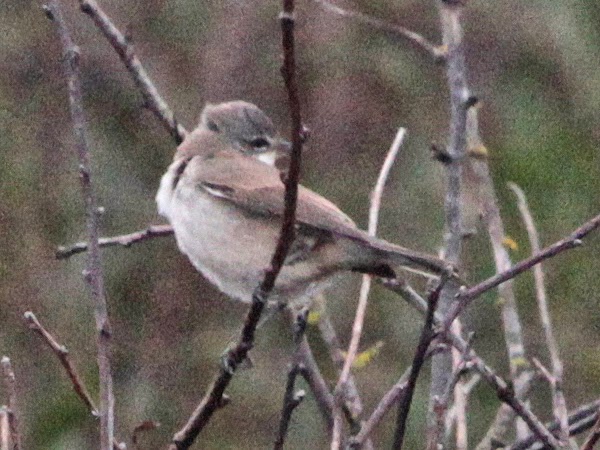 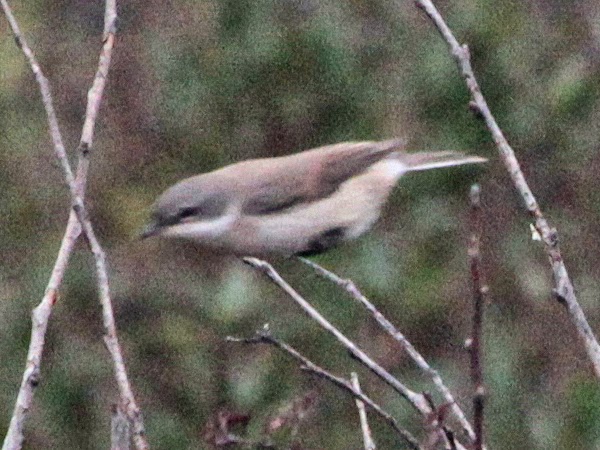 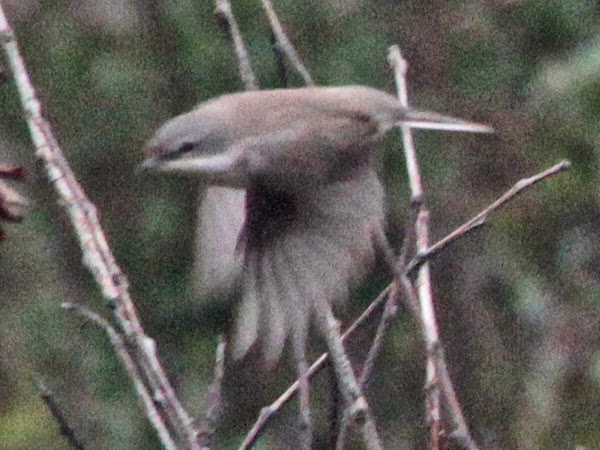 
In conclusion I think this is very probably a western curruca, and at the very least not identifiable as a Siberian blythi based on what information I can glean.  There was enough about it to make me think though, and I'm glad I asked the question.  It's made me learn a bit, and that's given me some pointers as to what to look for with future Lesser Whitethroat encounters.

I'm interested to see photos of the Lesser Whitethroat currently present at Portland.  This bird was trapped and is considered by some to be possibly a blythi and by others to be definitely a blythi.  I've not seen it, but from the photos it looks strikingly similar to the Burnham Overy bird in a lot of ways.  It looks different in different photos, as does the Burnham one, with some looking more brown headed and others looking very grey-headed.  It looks to be a colder greyer looking bird than the Burnham one, consequently with less contrast between the back and the head, but it will be interesting to see how it pans out with the DNA analysis.  Maybe the bird looked more distinctive in the field, but if the Dorset bird is blythi and mine was curruca then I've got a lot more learning to do before I can tell them apart!