Wigeons with white on the head (and Brent Geese)

Just curious about this - does anyone know the answer?


I know leucism and other pigment-deficiency conditions can affect birds in different ways, for example making the whole bird very pale, or just making parts of the bird white, but the situation with Wigeon strikes me as being different from most other instances.

Thinking of the birds I've seen that have had patches of pure white in their plumage, this white can appear in different places on different individuals.  I've seen lots of Pink-footed Geese showing white patches but the position varies by bird (though typically it includes primaries and bands across the neck or belly).  I've seen lots of Blackbirds with white plumage, but haven't noticed any pattern as to which bits will be white.  But Wigeon seem different.  I've seen half a dozen Wigeon with obvious white patches and each one has had this white patch on the head.  The exact size and shape has varied (usually diffuse and sometimes more or less tending towards speckling) but always just behind the eye.

Here are some of them:


Why is it always the side of the head that is affected - I've never seen a Wigeon with patches of white anywhere else (I have seen generally washed out birds, but that's a different condition affecting all or most of the plumage making it paler than normal, not white).

Brent Geese are the same.  Again I've seen birds that are generally washed out, paler than normal all over, but the birds I've seen with abnormal pure white plumage affecting only a small part of the bird have all been similar - they've all had white speckling on the head, albeit varying in extent.  Here are a few, but I've far more in addition to these, all similar.


Is this the same with the other forms of Brent Goose?  I've only seen it in Dark-bellied but that's probably just because it's the only form I see thousands of every year.

Yet another Wigeon with white on the head here... 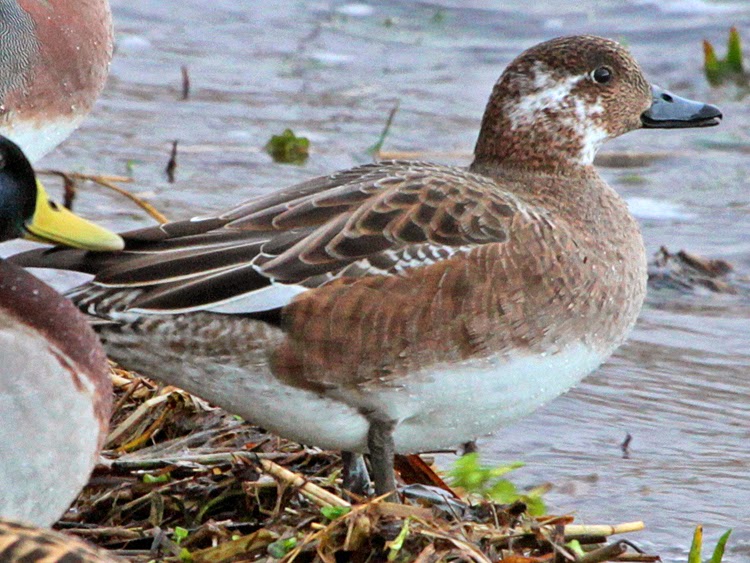 Seems that the first two birds from Salthouse in February 2014 and December 2012 were in fact both the same bird, as it is back in December 2015, still looking the same.  Can't be a first-winter then and I assume it's an intersex female.  More on that in this post.