Every now and then I hear discussions about Eurasian Wigeon that have turned up in North America showing some green behind the eye.  Most books don't illustrate this and the sceptics cry, "Hybrid!".  Of course most of us who are lucky enough to look at lots of Wigeon this side of the Atlantic know well that Wigeon often show a little green behind the eye - it's not a sign of hybrid origin.

But what about Wigeon with complete green headbands?  Is this just normal variation?  Or are these birds hybrids?  Like these:


Most people I've discussed this with consider that it's just the extreme of variation within pure Wigeons.  These birds don't show any other sign of hybridisation so they can't be first-generation hybrids, and many first-generation Eurasian x American Wigeon hybrids don't show a green headband like this anyway.  The theory is that Wigeons have inherited the mix of genes required to produce a green headband from a common ancestor but that these genes are not usually expressed in Eurasian Wigeon.  Always present, normally suppressed, but expressed in just a few individuals.  A recent discussion on ID-Frontiers seemed to reach the same conclusion but thanks to Joern, Carl Gunnar, Lars and Henry with whom I had already discussed these birds.

Whilst this theory has much merit, two observations haven't sat comfortably with it for me:
Well this is one mystery I made some progress with recently.  I had the opportunity to study a few hundred Wigeon at close range and in excellent light the other day.  The main thing I learned is that there is in fact much more variation than I had appreciated, and it's more common than I'd realised.  My initial observations described as point 1 above proved not to be valid - there is indeed a continuum, with many birds showing green extending further behind the eye than most, but not as far as the few. 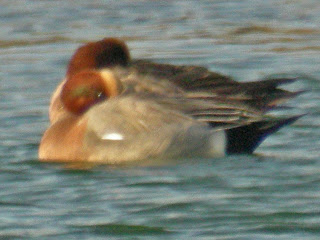 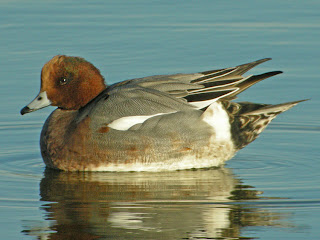 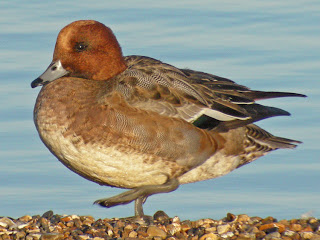 
It still doesn't explain the geographic variation but there may be other explanations for that.  Moreover it's only anecdotal so far as I know and like my first point, maybe it won't stand up to more careful observation.  Sadly I've got no trips to the Far East or India planned so I won't be able to test that one myself - but if you travel more widely let me know if it stacks up with your experience!

I noticed a couple of other things on some of the earlier green-banded Wigeons I saw, which I wondered if they might be linked.  A couple showed a small dark (green?) wedge at the upper point of the cream forecrown, absent from most Wigeon.  However I've since found this on other Wigeon that don't have green behind the eye, so it seems not to be linked.  One also showed pale at the base of the bill extending further into the cheek area than normal, but again this seems to be a variable feature and not linked to the extent of green behind the eye. 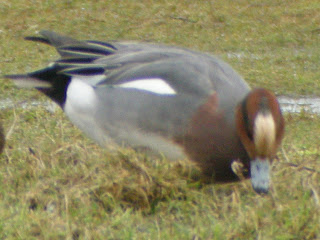 Eurasian Wigeon, Pentney, 31st March 2009
(the same bird as the one at the top of this post, now showing the dark wedge at the apex of the cream forecrown)

Nothing to do with the above, but worth a mention while I'm talking about variation in Wigeon, I also had the opportunity to photograph a few first-winter drake Wigeon in flight.  It's well-known that young male Wigeon lack the white forewing of adults but perhaps not quite so well-known that they continue to lack this after they've moulted their head and body feathers.  Actually it's quite well documented, so this is nothing new, but I thought it was interesting to show a couple of shots that illustrate it nicely.


Lots more photos of Wigeon on my website of course.

And while we're talking about green on duck heads where we perhaps don't expect it, here's a nice first-winter drake Pintail with a green sheen.  Not the same issue as the Wigeon here of course - in this instance I think it's just a case of how the light catches it, a bit like Tufted Duck I suppose only less obvious. 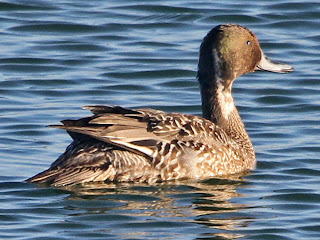 A quick postscript following more study of Wigeon over the course of the winter.  I knew that the green on a duck's head is irridescent, i.e. the intensity of colour and the colour itself is variable according to the intensity of the sunlight and the bird's angle to the light compared to the observer.  I had even noticed that some of my observations of Wigeon with the most green on the head had been in strong sunshine (including the photos above).  But I hadn't quite realised the extent to which the light impacts the colour when the normal ground colour is chestnut-brown as on a Wigeon's head.

A few days after I posted this I studied a flock of several hundred Wigeon a bit further round the Norfolk coast in dull and cloudy conditions - not one of them showed the slightest hint of green in their head.

Many of the questions about variability remain.  Most Wigeons don't seem to show green behind the eye even when it's sunny.  A few do even when it's not sunny.  What causes that variation is still an unanswered question, but the impact of sunlight does mean it will be difficult to assess how much it varies geographically.  As the extent of green varies according to the brightness and direction of sunlight it will be nigh-on impossible to make meaningful comparative assessments between different populations.

Thanks to everyone who has commented privately about this subject, and especially for the offers to get involved in further study in different countries, were we to find a meaningful way of doing that.
Posted by Dave Appleton at 22:28