For several years I noticed increasing numbers of reports of Japanese Green Pheasants in Norfolk, but when I eventually started seeing these birds, something didn't seem quite right.  I've never been to Japan, and have never seen a real Green Pheasant, but in the photos I've seen they've had pale blue wing-coverts and a pale blue rump.  The birds I was seeing were superficially similar, but they weren't quite right.  Sometimes they looked green, but in some lights they looked blue or purple - or even black.  Notably the wing-coverts and rump always seemed to be more-or-less the same colour as the rest of the wings and body - or at least not significantly paler as they should be on Green Pheasants.

A bit of research first turned up information about "melanistic" Pheasants, and these reports clearly related to the birds I was seeing.  A bit more research uncovered talk of Pheasants of a mutant variant known as 'tenebrosus'.  These were the same birds, and apparently it wasn't strictly correct to call them melanistic.

I've not managed to determine the origins of this variant.  Some reports hint at the possibility that there are some Green Pheasant genes present, but so far as I can tell this idea is based only on speculation from its appearance rather than any firm evidence (but please correct me if you know otherwise).  Green Pheasants and Common (or Ring-necked) Pheasants are of course closely related - variably treated as either a subspecies or full species - so they doubtless have similarities in their genetic make-up.  A mutation in one species could easily result in the bird throwing up features normally associated with the other species.  I suspect that's the explanation, rather than them being hybrids.  And as with domestic duck breeds, when a mutant has characteristics that are desired by keepers birds are selectively bred to establish these characteristics.  That seems to be what's happened, and the result is Phasianus colchicus var. 'tenebrosus', or Tenebrosus Pheasant.

However they came to be they're stunningly beautiful birds.  I've noticed that they seem to become quite common in an area for a while and then disappear, presumably because the local gamekeeper has favoured them for a bit and then they've either died out or they've lost favour with the gamekeeper for some reason.  Outside of these localised patches of abundancy they seem to be fairly widespread and not desperately uncommon - I see odd birds at widely scattered locations from time to time.

Here are a few males:

Pheasant (var. 'tenebrosus'), Great Hockham, 12th March 2006 - one of the first birds I saw well.  At around this time Tenebrosus Pheasants seemed to outnumber ordinary Pheasants in this area but in recent visits to the area I've not seen any 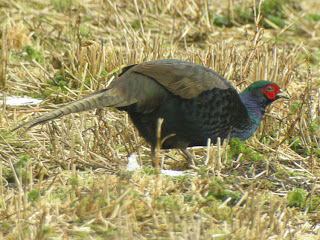 Pheasants (var. 'tenebrosus'), south of Wells, 13th April 2011 - there were loads here in spring 2011 but I've not seen any on subsequent visits


Some birds have a few paler brown markings along some of the feather shafts.  Not sure if a breeder would regard such birds as 'pure' Tenebrosus or not.  This one's pretty close if not:


The brown internal markings on some of the feathers of this bird are a bit more obvious.  Still a Tenebrosus?

I've been able to find remarkably little information about what females are supposed to look like.  But I have seen a lot of dark female Pheasants, often in the same places as I've seen male Tenebrosus Pheasants, so I presume that's what they are.

Supporting the argument that the often-used term "melanistic" isn't technically correct for these Pheasants, many of these dark females show obvious pale fringing on the feathers, despite the brown base colour being much darker than on normal Pheasants.  Here are a few:

Pheasant (var. 'tenebrosus'), between Flitcham and West Newton, 20th February 2009 - not sure what the significance of the bluey patch around the eye is - this isn't a typical feature of any form of Phasianus colchicus so far as I know

Notice how the females seem to often show an irridescent purply patch on the side of the neck, a feature absent from normal female Pheasants.