On Saturday I had the opportunity to watch and photograph several Marsh Tits coming down to seed at Lynford Arboretum.  Lynford has certainly hosted Willow Tits in the past and is not far from where Willow Tits continue to persist, but whether any recent claims of Willow Tit there have been reliable or not, I am not sure.  While I was watching I didn't see anything that made me suspect Willow Tit.  When I used to see both species regularly I found the bull-necked appearance of Willow Tit to be pretty reliable and quite different from the more delicate and elegant Marsh Tit (at least more reliable than the recent literature suggests it should be - but I do agree with these papers in so far as it's a subjective feature so easy to misapply, especially if identifying from photos).  Another feature that's dissed in recent literature is the wing-panel.  Well rightly so as there's huge overlap, but then again I wonder if birds at the extremes might be identifiable on that feature alone?  Anyway, I digress - my point is that all the birds I saw looked like Marsh Tits.  Many of them called and I definitely only heard Marsh Tits.  I suppose it's not impossible that a Willow Tit sneaked in without calling while I was looking through the camera lens rather than paying attention to what the bird looked like, but I doubt it.

These are some of my pics: 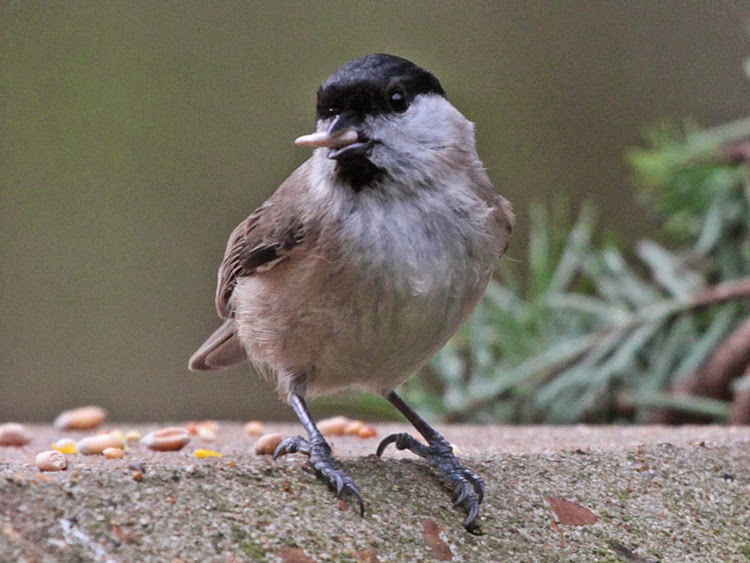 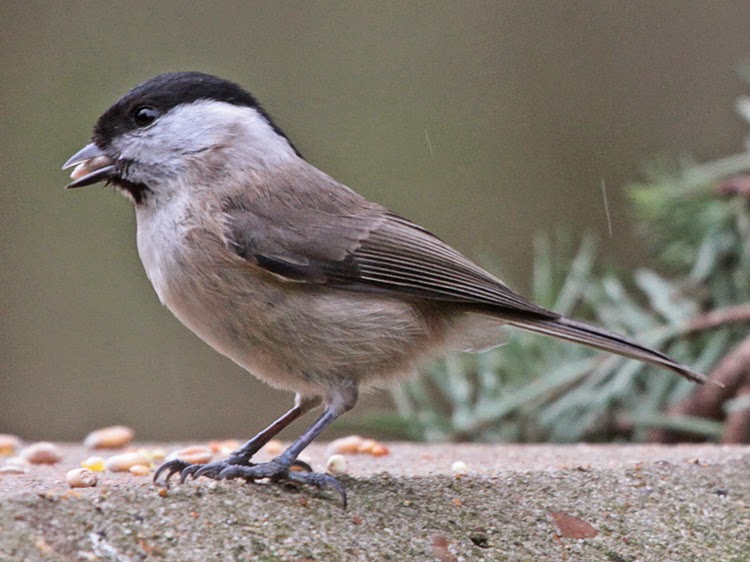 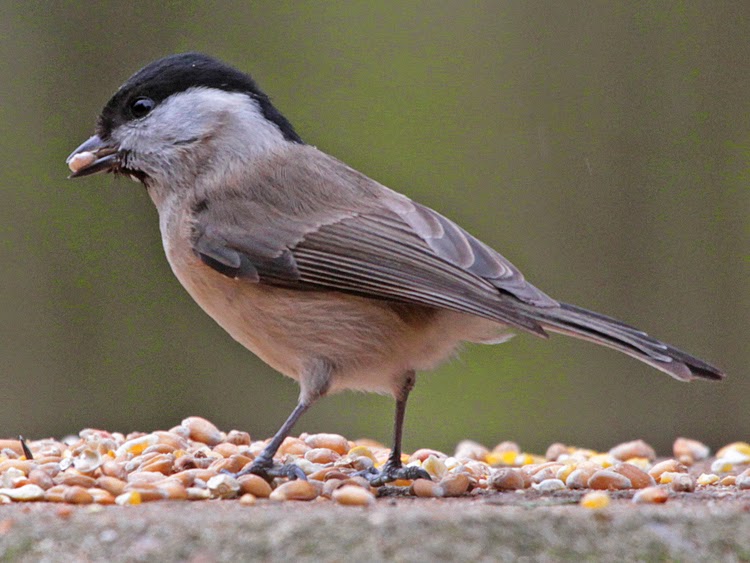 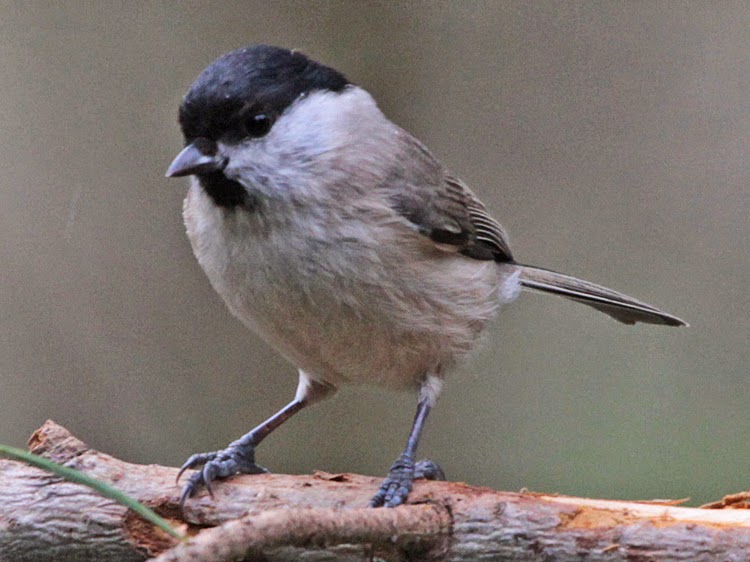 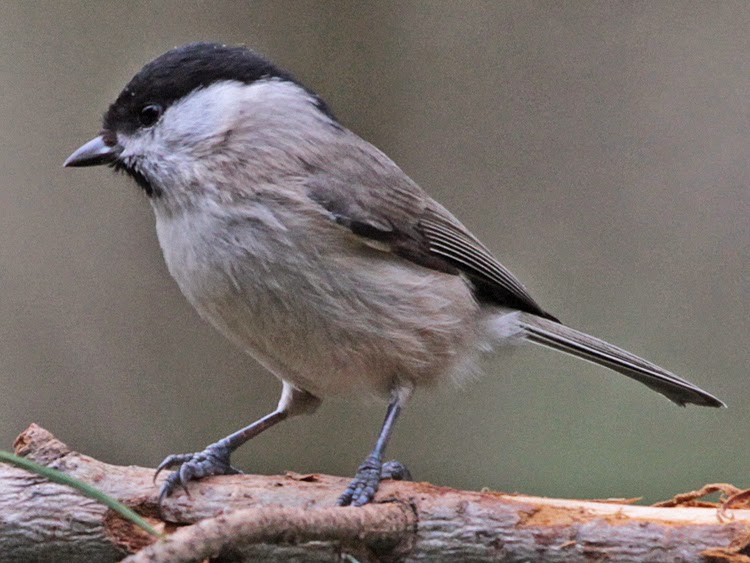 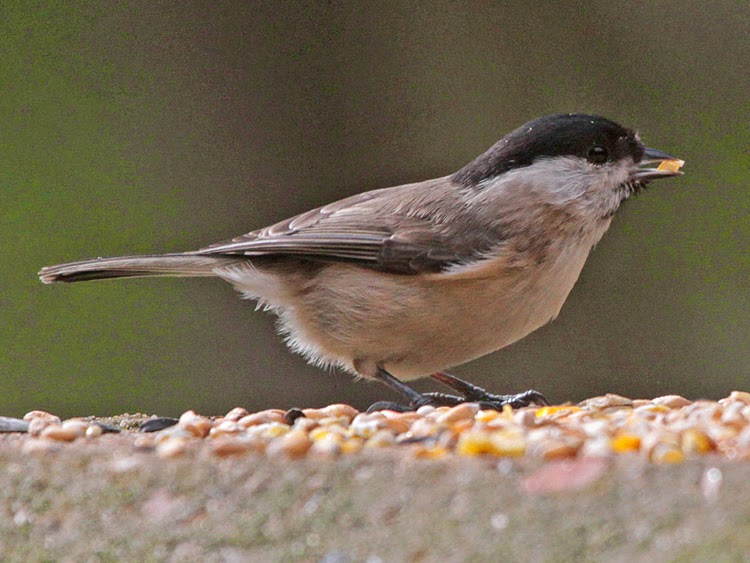 
Some of these birds seem to have black nasal bristles, like they're supposed to.  But a couple of them seem to have at least a slightly brownish tone to the nasal bristles.  It's very subtle, but I don't think it's just my imagination - can you see the brown in these? 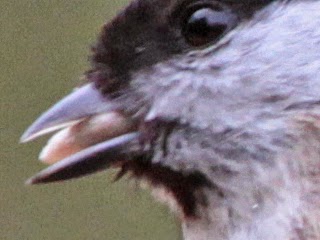 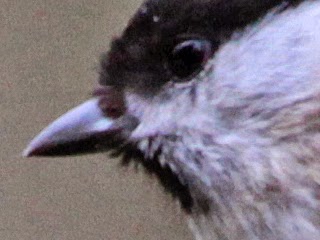 
The first of these two is a tight crop of the second photo above.  The pale spot on the mandible isn't obvious in this photo but it is in the other photos of the same bird (including the top photo of the six above).  In any case it looks like a pretty standard Marsh Tit and doesn't have anything to make me think it might be a Willow Tit.  The second is a tight crop of the fifth photo in the set above (same bird in the fourth photo too).  That bird does look a bit more Willowy in the photos, structurally, but I didn't pick that up in the field.  It also shows a clear and strong pale mark at the base of the upper mandible which, while not held out to be 100% reliable, is surely a pretty clear pointer to this being a Marsh Tit.

Now I don't think the brown tones on my birds here are as strong and clear as they are in Ashley's photos of brown-bristled Willow Tits on BirdForum.  But to my eyes there's a clear contrast between the slightly brownish bristles and the blacker forehead and crown, especially on the lower photo.

If possibilities 2 or 3 are the explanation then this has implications for how we should apply Ashley's new feature, and clearly considerable care is required (and much more so if possibility 1 is the answer).  I am personally content to rule out possibility 4.  I think we need more understanding before embarking too strongly on the hybrid theory, though I would point out that (a) hybridisation between these two species has been reported, and is very likely to be overlooked when it does occur so can be expected to be massively under-reported; (b) hybridisation between other Poecile species (e.g. in North America) occurs quite frequently and (c) hybridisation is most likely in places where one species is either spreading into an area already occupied by the other (not relevant here) but perhaps also where one species is withdrawing from an area still occupied by the other (possibly very relevant here).

What do you think?