To set the context I've been interested in Wigeon with white on the head for a while, having noticed several females in different places showing patches of white behind the eye.  I blogged about this in early 2014, questioning why this apparent leucism should occur at a relatively high frequency behind the eye rather than anywhere else.  I noticed a similar phenomen with Brent Geese which fairly often show white speckling on the head but very rarely show abnormal white feathering elsewhere.


Then when I saw the same white-headed Wigeon at Salthouse over the course of several winters it dawned on me that my initial identification of it as being a first-winter male could not have been correct - it can't still be a first-winter male!  Its mixture of male and female features retained over at least 4 winters must surely mean it has gender issues, presumably an intersex bird.  I blogged about that at the end of last year. 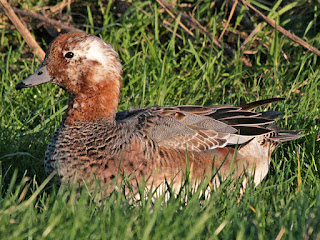 
Well on Saturday things took a bizarre twist.  I found another Wigeon with white behind the eye - quite a lot in fact - more than any of the previous birds.  And what was really weird is that it seemed to show a mixture of male and female features, though was predominantly female.  I think the clear-cut white-edged wing-coverts and late date for a predominantly female-like bird mean that it cannot be a first-winter male, so it would appear that it was another intersex bird. 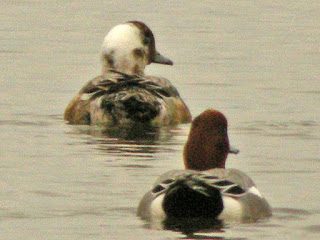 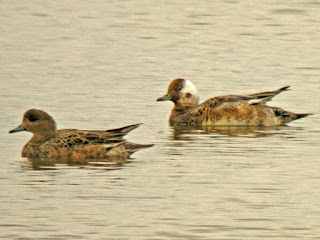 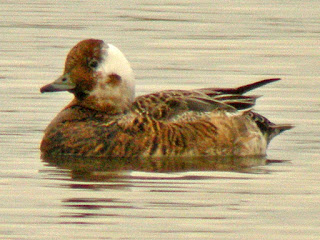 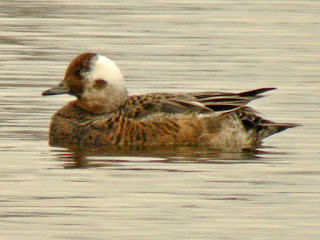 
Now, in the photos the evidence of masculinity is sparser than I'd thought while I was watching it.  But I think it's there.  I don't think an ordinary female would show so much black around the tail with contrasting whitish area in front, the scapulars are perhaps a tad long and grey (?) and there seems to be a slight hint of the cream forehead showing through.  Maybe that's not entirely convincing - perhaps I should not say definitively that this bird is intersex, but it seemed that way in the field and it certainly doesn't look typical for a female.

One feature that is atypical for either gender is the dark barring on the breast and flanks.  Now it may be a coincidence (but I doubt it) but intersex Pintails seem to show dark vaguely similar dark barring on the flanks that is not present (in the same form) in normal male or female Pintail.  The Salthouse Wigeon shows a bit of this too, mainly on the breast.

So if this is an intersex bird, what are the odds of two intersex Wigeons both having white on the head if that white is simply random appearance of leucism?  Surely impossibly low?  So that would suggest that the white on the head is somehow linked to the birds' abnormal gender.  Why on earth should that be so?

If it is so, it made me wonder if ALL the Wigeons I've seen with white behind the eye might be intersex?  Most have been females, which is fine.  Intersex birds seem to be females that develop male characteristics over time, so we might expect many to still resemble females externally.  Only two were initially identified as males, the Saltouse bird that turned out to be intersex when it reappeared in subsequent winters, and one from Buckenham in 2014.  Here's the Buckenham bird... check out the breast!

So the question is, can pigment deficiency conditions like leucism be linked to gender abnormality?  And why?

And what about those Brent Geese - are they all intersex too?


Or is it just a coincidence?  Or is there another explanation I've missed?  Let me know what you think.